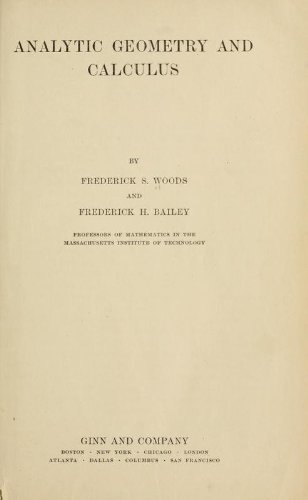 Description:
The first part of the book brings together all methods for the graphical representation of functions of one variable, both algebraic and transcendental. This has the effect of devoting the first part of the book to analytic geometry of two dimensions, the analytic geometry of three dimensions being treated later when it is required for the study of functions of two variables. The transition to the calculus is made early through the discussion of slope and area, the student being thus introduced in the first year of his course to the concepts of a derivative and a definite integral as the limit of a sum.

Functions Modeling Change: A Precalculus Course
by Marcel B. Finan - Arkansas Tech University
This supplement consists of the author's lectures of a freshmen-level mathematics class offered at Arkansas Tech University. The text represents an effort to produce exposition that is accessible to a student at the freshmen or high school levels.
(13512 views)

Elliptic Integrals
by Harris Hancock - J. Wiley
Elliptic integrals originally arose in connection with the problem of the arc length of an ellipse. The author limits the monograph to the Legendre-Jacobi theory. He confines the discussion to the elliptic integrals of the first and second kinds.
(7186 views)