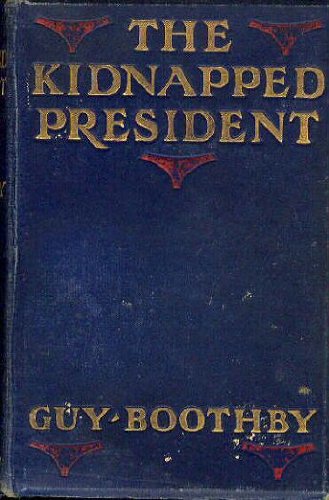 The Kidnapped President
by Guy Boothby

Description:
How well I remember the day on which I was appointed fourth officer of the ocean liner Pernambuco, running from London to South America. I should here remark that I held a second officer's certificate, but I was, nevertheless, glad enough to take what I could get, in the hope of being able to work my way up to something better...

A Bid for Fortune
by Guy Boothby - D. Appleton and Co.
Richard Hatteras rescues a lovely young woman in distress, the start of a series of events that sees him falling in love and becoming ever more entangled in the machinations of the shadowy Doctor Nikola, who will stop at nothing to steal his prize.
(3364 views)

The Race of Life
by Guy Boothby - F. M. Buckles and Company
It was nearly nightfall when that little party made their appearance at the head station. Dick had sent the ration cart out some miles to meet them, so that my mother was spared the pain of seeing the body of her husband brought in upon his horse ...
(2453 views)

The Lust of Hate
by Guy Boothby - ManyBooks
Mr. Boothby is at his best in this romance, which is characterized by unflagging interest and by most stirring adventures in which Dr. Nikola plays a leading part. 'Dr. Nikola' was considered one of the most thrilling stories ever published.
(5437 views)

The Childerbridge Mystery
by Guy Boothby - F.V. White
William Standerton had emigrated to Australia at the age of 15. He decided to return to England, purchase a manor house and retire to comfortable country living. Just prior to departure, something occurs which has a dire effect on those plans ...
(2490 views)