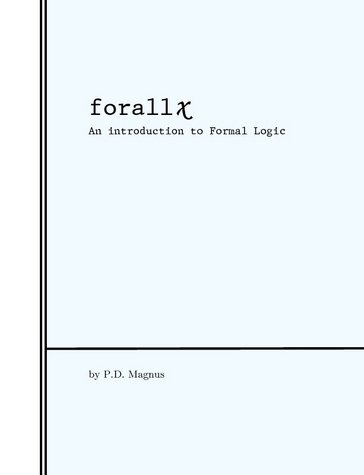 forall x: An Introduction to Formal Logic
by P.D. Magnus

Description:
forall x is an introduction to sentential logic and first-order predicate logic with identity, logical systems that significantly influenced twentieth-century analytic philosophy. After working through the material in this book, a student should be able to understand most quantified expressions that arise in their philosophical reading.

Actual Causality
by Joseph Y. Halpern - The MIT Press
In this book, Joseph Halpern explores actual causality, and such related notions as degree of responsibility, degree of blame, and causal explanation. The goal is to arrive at a definition of causality that matches our natural language usage.
(4649 views)

Lectures on Linear Logic
by A. S. Troelstra - CSLI
This text deals with logical formalism, cut-elimination, the embedding of intuitionistic logic in classical linear logic, proofnets for the multiplicative fragment and the algorithmic interpretation of cut-elimination in proofnets.
(11584 views)

Logics of Time and Computation
by Robert Goldblatt - Center for the Study of Language
Sets out the basic theory of normal modal and temporal propositional logics, applies this theory to logics of discrete, dense, and continuous time, to the temporal logic of henceforth, next, and until, and to the dynamic logic of regular programs.
(9986 views)

A Problem Course in Mathematical Logic
by Stefan Bilaniuk
An introduction to mathematical logic for undergraduates. It supplies definitions, statements of results, and problems, along with some explanations, examples, and hints. The idea is to learn the material by solving the problems.
(20131 views)