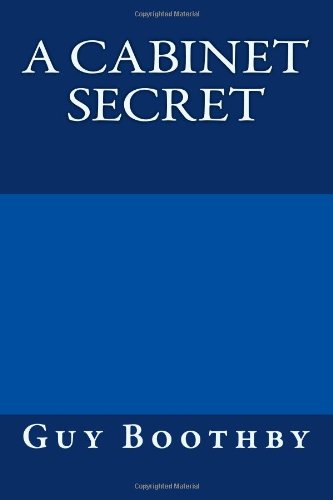 A Cabinet Secret
by Guy Boothby

Description:
Witty spy adventure set during the Boer Wars of the late 19th Century. While the War between England and the South African Republics forms the basis of the story, the characters and incidents therein described are purely fictional, and have no sort of resemblance, either intended or implied, with living people.

The Beautiful White Devil
by Guy Boothby - D. Appleton and Company
The last stroke of twelve was just booming out on the muggy night when I stepped on to the landing-stage to await my mysterious employer. The hotel servant who had carried my bag put it down, and having received his gratuity left me ...
(3069 views)

The Mystery of the Clasped Hands
by Guy Boothby - D. Appleton and company
For a moment after he realized the true state of affairs Godfrey was spellbound with terror. Was it just possible that he would be able to head the horse off from the pit? ... it would be the end of all things as far as Miss Devereux was concerned.
(2993 views)

Pharos, The Egyptian
by Guy Boothby - D. Appleton and Company
Originally published in 1899, 'Pharos, the Egyptian' is a thriller with romance and supernaturalism. A very sinister old man, Pharos, proves to be Ptahmes, a mummy who has survived through the centuries with full magical powers.
(2899 views)

The Red Rat's Daughter
by Guy Boothby - Ward, Lock and Co. ltd
John Grantham Browne uttered a cry of horror. The girl had wandered off the path, slipped down the bank, and was now clinging to a tree only a few feet removed from the brink of one of the most terrible precipices along the Norwegian coast ...
(3020 views)