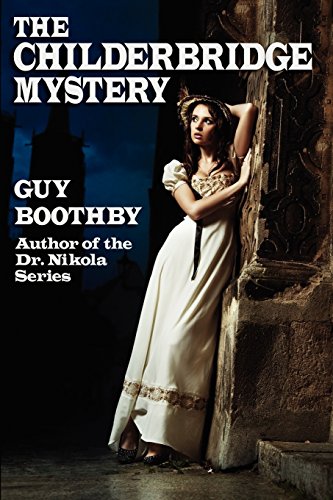 The Childerbridge Mystery
by Guy Boothby

Description:
William Standerton had emigrated to Australia at the age of 15. His wife had died a few months after the second child was born. He decided to take his children, 24 year old James and 20 year old Alice, and return to England, purchase a manor house and retire to comfortable country living. Just prior to departure from Australia something occurs which has a dire effect on those plans...

A Bid for Fortune
by Guy Boothby - D. Appleton and Co.
Richard Hatteras rescues a lovely young woman in distress, the start of a series of events that sees him falling in love and becoming ever more entangled in the machinations of the shadowy Doctor Nikola, who will stop at nothing to steal his prize.
(3673 views)

My Strangest Case
by Guy Boothby - L. C. Page & co.
I am of course prepared to admit that there are prettier places on the face of this earth of ours than Singapore; there are, however, few that are more interesting, and certainly none that can afford a better study of human life and character...
(3341 views)

The Race of Life
by Guy Boothby - F. M. Buckles and Company
It was nearly nightfall when that little party made their appearance at the head station. Dick had sent the ration cart out some miles to meet them, so that my mother was spared the pain of seeing the body of her husband brought in upon his horse ...
(2781 views)

The Mystery of the Clasped Hands
by Guy Boothby - D. Appleton and company
For a moment after he realized the true state of affairs Godfrey was spellbound with terror. Was it just possible that he would be able to head the horse off from the pit? ... it would be the end of all things as far as Miss Devereux was concerned.
(2884 views)