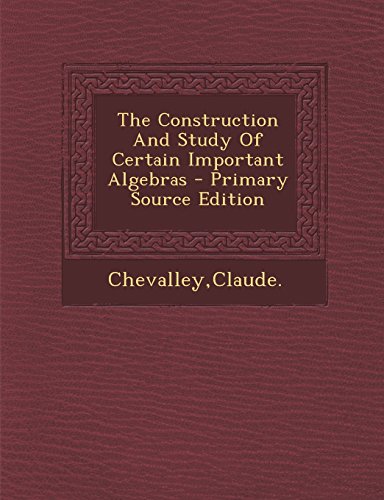 The Construction and Study of Certain Important Algebras
by Claude Chevalley

Description:
This is the reproduction of the beautiful lectures delivered by Professor C. Chevalley at the University of Tokyo in April-June 1954. Contents: Graded algebras; Tensor algebras; Clifford algebras; Some applications of exterior algebras.

On Lie Algebras Of Prime Characteristic
by George B. Seligman - American Mathematical Society
The purpose of the present memoir is to demonstrate the applicability, under certain restrictions on the algebra and the base field, of the techniques used in the determination of all simple Lie algebras of characteristic zero.
(3537 views)

An Introduction to the Algebra of Quantics
by E.B. Elliott - The Clarendon Press
The primary object of this book is that of explaining with all the clearness at my command the leading principles of invariant algebra, in the hope of making it evident to the junior student that the subject is attractive as well as important.
(7840 views)