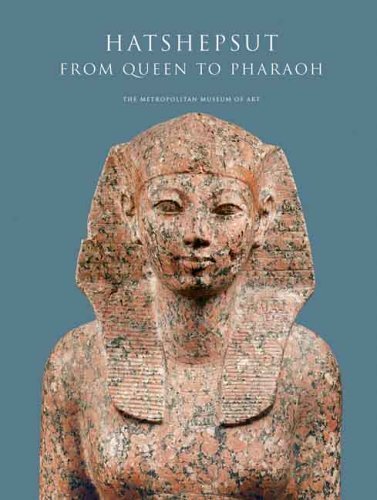 Hatshepsut: From Queen to Pharaoh
by Catharine Roehrig (ed.)

Description:
Essays by leading Egyptologists investigate the circumstances that allowed or compelled Hatshepsut to become king; the relationship between Hatshepsut and Thutmose III during their joint reign; powerful figures in the royal court, particularly Senenmut, Hatshepsut's architect and steward; Hatshepsut's adoption of the Egyptian conventions of royal representation in order to bolster her legitimacy, as well as her use of architecture to make political statements; etc.

Egyptian Pyramids: An Analysis of a Great Mystery
by Everett W. Fish - E. W. Fish
No problem of the present age so fully deserves the title 'A GREAT MYSTERY' as that which is involved in the origin and interpretation of the Great Pyramid and its lesser companions. They all belong to one epoch and to one race of invaders ...
(3980 views)

Cleopatra: A Study
by Henry Houssaye - Duprat & Co.
For twenty years she maintained the independence of Egypt. It was done by mere womanly means -- intrigue, gallantry, grace, and weakness. If her renown is immortal, it is because she is the heroine of the most dramatic love-story of antiquity.
(2225 views)

House of Eternity: The Tomb of Nefertari
by John McDonald - Getty Publications
This book is replete with full-color photographs of the contrasting desert landscape, the elaborate tomb, and the paintings. Included are explanations of the hieroglyphs and artwork, plus interesting snippets from Nefertari's culture.
(13502 views)