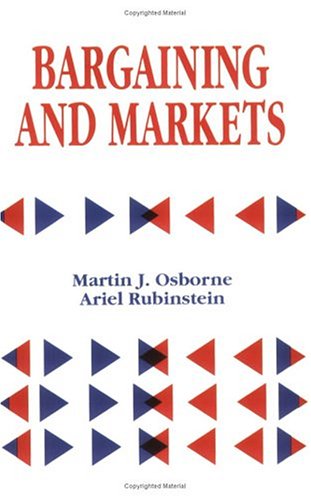 Description:
Bargaining and markets by Martin J. Osborne and Ariel Rubinstein was published in 1990 by Academic Press, now a division of Elsevier. It presents the modern strategic theory of bargaining and describes, in a consistent framework, several applications of this theory to the study of markets. It uses a small number of models to illustrate the key points in the theories and offers detailed proofs of all results.

The Pure Theory of Capital
by Friedrich A. Hayek - Ludwig von Mises Institute
The greatest failing of non-Austrians theories of macroeconomics is that they lack a robust theory of capital. F.A. Hayek sought to fill out the theory of the business cycle with an impenetrable one, and the result was this remarkable 1941 treatise.
(12376 views)

Discovering Artificial Economics
by David Batten - Westview Press
This is an informal and revealing introduction to the ideas of modern systems theory and self-organization as they apply to problems in the economic realm. David Batten interleaves anecdotes and stories with technical discussions.
(10185 views)

Farewell to the Self-Employed: Deconstructing a Socioeconomic and Legal Solipsism
by Marc Linder - Greenwood Press
This work offers a theoretical foundation for discussing the self-employed, their role over time, and the formulation of policy towards them. It is a comprehensive analysis of self-employment to integrate legal, sociological, and economic theory.
(6473 views)

The Anti-Capitalistic Mentality
by Ludwig Von Mises - Libertarian Press
The author searches for the roots of the common anti-capitalist bias. What makes so many people unhappy in the private property order? In such a system, the failures need a scapegoat. People whose ambitions have not been satisfied blame the system.
(14293 views)