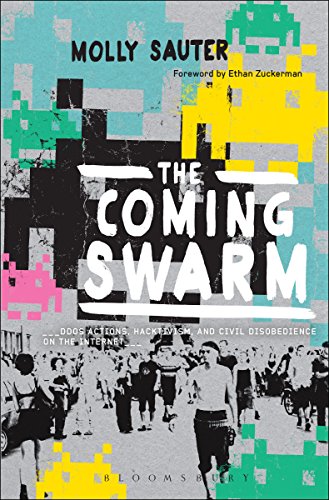 The Coming Swarm: DDOS Actions, Hacktivism, and Civil Disobedience on the Internet
by Molly Sauter

Description:
With a historically grounded analysis, and a focus on early deployments of activist DDOS as well as modern instances to trace its development over time, The Coming Swarm uses activist DDOS actions as the foundation of a larger analysis of the practice of disruptive civil disobedience on the internet.

The Hacker Crackdown
by Bruce Sterling
The book highlights the 1990 assault on hackers, when law-enforcement officials arrested scores of suspected illicit hackers. These raids became symbolic of the debate between fighting serious computer crime and protecting civil liberties.
(11998 views)

Data + Design: A Simple Introduction to Preparing and Visualizing Information
by Trinna Chiasson, Dyanna Gregory, et al. - Infoactive
This book explains important data concepts in simple language. It is written for graphic designers, content producers, and less-technical folks who want some extra help knowing where to begin, and what to watch out for when visualizing information.
(6287 views)

The Global Impact of Open Data
by Andrew Young, Stefaan G. Verhulst - O'Reilly Media
Open data has spurred economic innovation in recent years, but few people understand how open data works. The book presents detailed case studies of open data projects throughout the world, along with in-depth analysis of what works and what doesn't.
(3715 views)