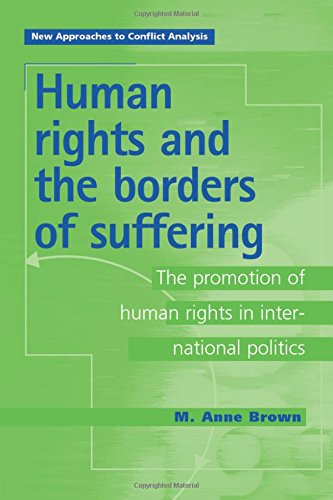 Human Rights and the Borders of Suffering
by M. Anne Brown

Description:
This book argues for greater openness in the ways we approach human rights and international rights promotion, and in so doing brings some new understanding to old debates. Starting with the realities of abuse rather than the liberal architecture of rights, it casts human rights as a language for probing the political dimensions of suffering.

In Modern Bondage: Sex Trafficking in the Americas
- DePaul University College of Law
This second revised edition includes the expanded findings of trafficking of women and children for purposes of commercial sexual exploitation in the Americas. Included are the regional overview of Belize, Costa Rica, the Dominican Republic, etc.
(11333 views)

Tortured Justice: Using Coerced Evidence to Prosecute Terrorist Suspects
by Deborah Colson, Avi Cover - Human Rights First
The book finds the Bush Administration has undercut its own intended use of the military commission system at Guantanamo Bay by allowing the admission of coerced evidence. The report focuses on six prisoners who have alleged abuse while in custody.
(8201 views)

Enemies of All Humankind: Fictions of Legitimate Violence
by Sonja Schillings - Dartmouth College Press
The book draws attention to a century-old narrative pattern that not only underlies the legal category of enemies of the state, but more generally informs interpretations of imperial expansion, and protest against government-sponsored oppression.
(4018 views)

Can Human Rights Survive?
by Conor Gearty - Cambridge University Press
In this set of three essays, originally presented in 2005, Conor Gearty considers whether human rights can survive the challenges of the war on terror, the revival of political religion, and the steady erosion of the world's natural resources.
(6233 views)