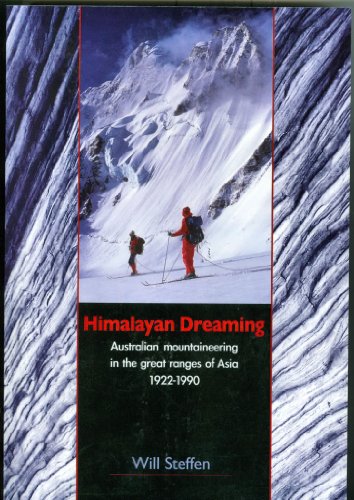 Himalayan Dreaming
by Will Steffen

Description:
How did climbers from the world's flattest, hottest continent become world-class Himalayan mountaineers, the equal of any elite mountaineer from countries with long climbing traditions and home ranges that make Australia's highest summit look like a suburban hill? This book tells the story of Australian mountaineering in the great ranges of Asia, from the exploits of a brash, young colonial with an early British Himalayan expedition in the 1920s to the coming of age of Australian climbers in the 1980s.

The Mountain that was 'God'
by John H. Williams - G.P. Putnam's sons
This little book is about the great peak which the Indians named 'Tacoma' but which is officially called 'Rainier.' Like the glacial rivers, its text will be found a narrow stream flowing swiftly amidst great mountain scenery...
(4606 views)

Adventures on the Roof of the World
by Aubrey Le Blond - T. F. Unwin
Tales of adventure easily intelligible to the non-climber, the lessons which most adventures can teach to those who may climb themselves one day. The book should be read by all who think of Alpine climbing, and by all who love stories of adventure.
(6316 views)

Mount Rainier: A Record of Exploration
by Edmond S. Meany (ed.) - The Macmillan Company
A challenging and fascinating collection of extracts from the original accounts of the men who discovered, explored and first ascended this sky-shouldering mountain of the Cascade Range, considered one of the most dangerous volcanoes in the world.
(4827 views)