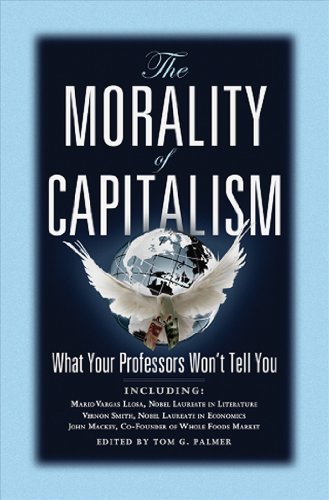 The Morality of Capitalism: What Your Professors Won't Tell You
by Tom Palmer

Description:
This book is about the moral justification of what philosopher Robert Nozick called 'capitalist acts among consenting adults'. It's about the system of cooperative production and free exchange characterized by the predominance of such acts.

The Benefits of the New Economy: Resolving the Global Economic Crisis Through Mutual Guarantee
by Guy Isaac, Joseph Levy, Alexander Ognits - ARI Publishers
The aim of the book is to point out the causes of today's economic turmoil and how it can be solved. The road toward solution lies not in any remedy from the past. Rather, it lies with a society where all support each other in mutual guarantee.
(8375 views)

Control or Economic Law
by Eugen von Böhm-Bawerk - Ludwig von Mises Institute
Gets to the heart of the matter regarding the application of economics to politics. Either we let economic law run its course, or we destroy prosperity. We must defer to economic law or we make matters worse by attempting to control society.
(6761 views)

The Case for Discrimination
by Walter Block - Ludwig von Mises Institute
Discrimination is an inevitable feature of the material world where scarcity of goods and time is the pervasive feature. There is no getting around it. Without discrimination, there is no economizing taking place. It is chaos.
(6540 views)