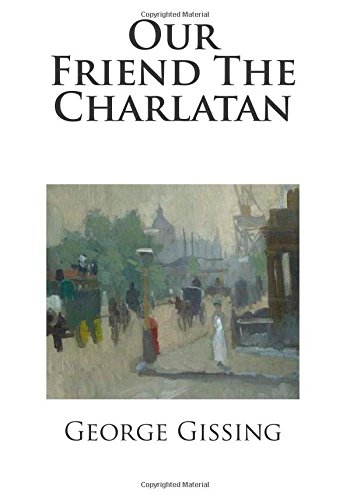 Our Friend the Charlatan
by George Gissing

Description:
A charming social satire about Dyce Lashmar, a young Oxford educated man with no discernible talents, but an unwavering confidence in his own abilities. Gissing remains relatively unfamiliar to most readers, and this book is a rarity even to his admirers. The book was written late in the author's life.

Sleeping Fires
by George Gissing - T. Fisher Unwin
A short novella that explores the possibility of finding a former love and overcoming grief and guilt in middle and late life. The protagonist initially struggles in the clutches of fate but then comes to terms with existence and its challenges.
(4307 views)

The Crown of Life
by George Gissing - Methuen & Co.
In this novel, a struggling young man sets his mind, quite arbitrarily, on gaining one particular woman's affection. It looks like mission impossible, for social reasons, but he doesn't give up and keeps dreaming and trying for years ...
(3715 views)

Charles Dickens: A Critical Study
by George Gissing - Dodd, Mead and company
The first piece of thorough criticism of Charles Dickens and his works. Published when Dickens' literary reputation was at its lowest ebb, it helped to instigate a revival of appreciation for the novelist which has continued unabated ever since ...
(4934 views)

Thyrza
by George Gissing - Dutton
Gissing tells the story of the martyrdom of Thyrza Tennant. She is pregnant by Andy McAdam; who not only refuses to marry her, but also marries her sister Laura instead. Thyrza never reveals the identity of the father. Barton Gorse loves Thyrza ...
(3841 views)