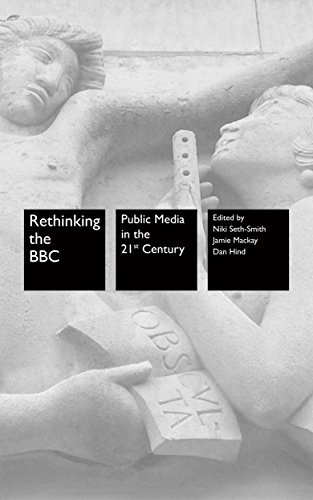 Rethinking the BBC: Public Media in the 21st Century
by Niki Seth-Smith (ed.)

Description:
Rethinking the BBC: Public Media in the 21st Century brings together some of the most influential and creative thinkers on media politics and policy in the UK and beyond. It is a vital contribution to the debate on public media at a moment of rapid change.

Audiovisions : Cinema and Television as Entr'actes in History
by Siegfried Zielinski - Amsterdam University Press
The book reconstructs the genesis of cinema and television as historically relative cultural forms, focussing on the interaction between the apparatus and its uses. It is also a plea for 'staying power' in studies of cultural technology of film.
(5415 views)

Performing the Digital
by T. Beyes, M. Leeker, I. Schipper - De Gruyter Open
The contributions engage with the implications of digital media and its networked infrastructures for modulations of affect and the body, for performing cities, protest, organization and markets, and for the performativity of critique.
(3107 views)

We the Media
by Dan Gillmor - O'Reilly Media, Inc.
The book about journalism's transformation from a mass-media structure to something more democratic, a story of evolutionary change and a modern revolution, because technology has given us a toolkit that allows anyone to become a journalist.
(15394 views)

Free Culture
by Lawrence Lessig - Penguin Press HC
Never before have the big cultural monopolists used the fear created by new technologies to shrink the public domain of ideas, even as the same corporations use the same technologies to control more and more what we can and can't do with culture.
(17605 views)