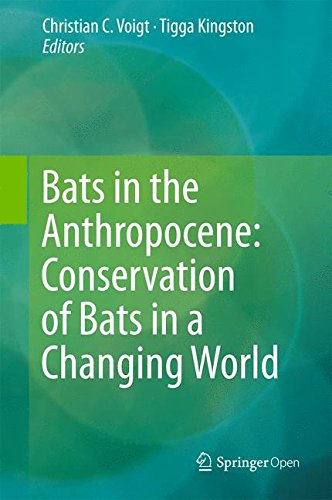 Bats in the Anthropocene: Conservation of Bats in a Changing World
by Christian C. Voigt, Tigga Kingston

Description:
This book focuses on central themes related to the conservation of bats. It details their response to land-use change and management practices, intensified urbanization and roost disturbance and loss. Increasing interactions between humans and bats as a result of hunting, disease relationships, occupation of human dwellings, and conflict over fruit crops are explored in depth.

Mammals of Mount Rainier National Park
by R.K. Grater, M.K. Potts - Mount Rainier Naural History Association
To know Nature in her various forms is to increase appreciation of the natural scene. It is for this purpose that this book has been written. The sequence of species used brings many of the larger animals ahead of the smaller and more obscure kinds.
(3577 views)

Extinct and Vanishing Animals of The Old World
by Francis Harper - American Committee for Wild Life Protection
The present work had its origin in a strongly felt need for definite information on the mammals that have become extinct, on those that are now threatened with the same fate, and on the measures that may be undertaken for their preservation.
(6393 views)

Gorillas and Chimpanzees
by R. L. Garner - Osgood, McIlvaine & Co
This book is the natural product of some years devoted to a study of the speech and habits of monkeys. It has led up to the special study of the great apes. The matter contained herein is chiefly a record of the facts tabulated during recent years.
(4849 views)