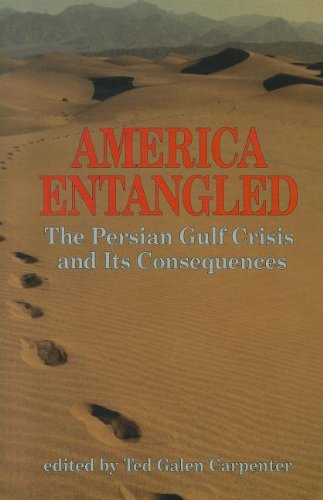 Description:
Despite the United States' quick military victory, many disturbing questions remain about our involvement in the Persian Gulf region. Instead of being swept away by the notion that the Persian Gulf War heralds an era of prolonged, unquestioned U.S. dominance in world affairs, Americans should soberly address that war and its implications. The contributors to this book believe there must be a full national debate on the rationale for America's new world order and on the costs and risks of that strategy.

The Myth of the Great Satan: A New Look at America's Relations with Iran
by Abbas Milani - Hoover Institute Press
This book contains a critical review of the history of America's relations with Iran debunks the myth of the United States as the 'Great Satan' as a necessary first step in establishing a new relationship between the two nations.
(8255 views)

Occupying Iraq: A History of the Coalition Provisional Authority
by James Dobbin - RAND Corporation
The American engagement in Iraq has been looked at from many perspectives: the flawed intelligence that provided the war's rationale, the failed effort to secure an international mandate, the rapid success of the invasion, etc.
(10618 views)

Target Iran: Drawing Red Lines in the Sand
by William John Cox - Smashwords
A history of Iran and its conflict with the United States and Israel over its uranium enrichment program, a discussion of the likelihood of war between the parties and a proposal for a comprehensive nuclear weapons policy for all nations.
(4920 views)

The Tragedy of the Middle East
by Barry Rubin - Smashwords
The title was chosen in great sincerity because the theme here is to explain how the region's modern history really is a tragedy. Terrible mistakes were made; the wrong roads were chosen. Bloodthirsty ideology took hold ...
(4120 views)