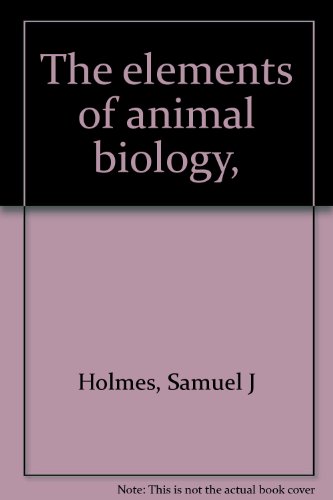 The Elements of Animal Biology
by Samuel J. Holmes

Description:
This volume is intended as an introduction to the elements of animal biology for the use of students in the high school. The order in which the main topics are treated is essentially like that which is followed in several of the best recent textbooks.

Meet the Invertebrates: Anemones, Octopuses, Spiders, Ants, and Others
by Katharine Rogers - Smashwords
The book reveals these apparently alien creatures to be fascinating animals dealing with the basic problems of living as all animals do. It explains how they work physiologically and describes their appearance, behavior, and perception of the world.
(8900 views)

Poisonous Dwellers of the Desert
by Natt Noyes Dodge - Southwestern Monuments Association
Some of the creatures living in deserts are known to be poisonous to man. The purpose of this book is to discuss the various poisonous dwellers of the desert, as well as to debunk some of the superstitions and misunderstandings which have developed.
(4107 views)

Curious Creatures in Zoology
by John Ashton - John C. Nimmo
A cryptozoological classic by John Ashton. It covers a wide variety of curious natural history that had been reported by early writers and explorers. Fact and fancy were both commonplace. Some creatures are well-known, while others are less so.
(6848 views)

Gliding Mammals: Taxonomy of Living and Extinct Species
by S.M Jackson, R.W. Thorington, Jr. - Smithsonian Institution Scholarly Press
There are 64 species of extant gliding mammals that are recognized, which are divided into six different families. These comprise eight species of gliding marsupials that live within Australasia and include six species of lesser gliding possums ...
(5994 views)