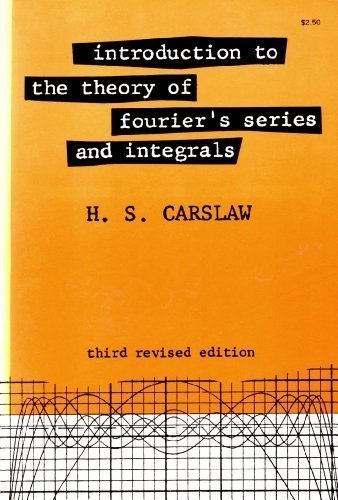 Introduction to the Theory of Fourier's Series and Integrals
by H. S. Carslaw

Description:
As an introductory explanation of the theory of Fourier's series, this clear, detailed text is outstanding. It covers tests for uniform convergence of series, a thorough treatment of term-by-term integration and the second theorem of mean value, enlarged sets of examples on infinite series and integrals, and a section dealing with the Riemann Lebeague theorem and its consequences.

Lectures on Topics in Mean Periodic Functions and the Two-Radius Theorem
by J. Delsarte - Tata Institute of Fundamental Research
Subjects treated: transmutations of singular differential operators of the second order in the real case; new results on the theory of mean periodic functions; proof of the two-radius theorem, which is the converse of Gauss's classical theorem.
(7559 views)

Real Harmonic Analysis
by Pascal Auscher, Lashi Bandara - ANU eView
This book presents the material covered in graduate lectures delivered in 2010. Moving from the classical periodic setting to the real line, then to, nowadays, sets with minimal structures, the theory has reached a high level of applicability.
(4183 views)