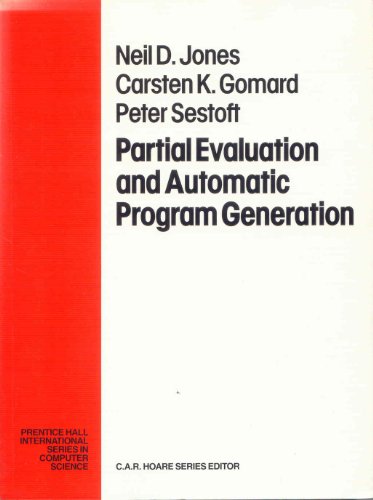 Description:
This book is about partial evaluation, a program optimization technique also known as program specialization. It presents general principles for constructing partial evaluators for a variety of programming languages, and it gives examples of applications and numerous references to the literature. Partial evaluation works with program texts rather than mathematical functions: a partial evaluator is an algorithm which, when given a program and some of its input data, produces a so-called residual or specialized program. Running the residual program on the remaining input data will yield the same result as running the original program on all of its input data.

Formal Syntax and Semantics of Programming Languages
by Kenneth Slonneger, Barry L. Kurtz - Addison Wesley Longman
The book presents the typically difficult subject of formal methods in an informal, easy-to-follow manner. Readers with a basic grounding in discreet mathematics will be able to understand the practical applications of these difficult concepts.
(14634 views)