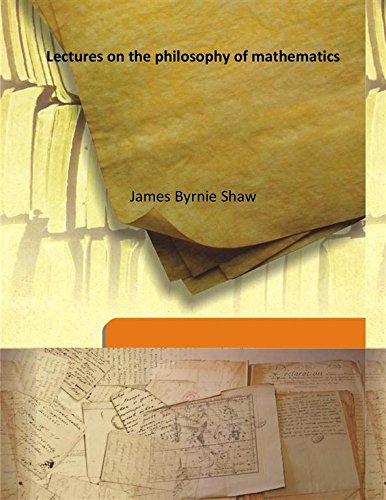 Lectures on the Philosophy of Mathematics
by James Byrnie Shaw

Description:
The author was invited to deliver a course of lectures before a club of graduate students of the University of Illinois on the subject of The Philosophy of Mathematics. The more difficult questions of mathematical philosophy had to be omitted. It tended to widen the field in the way of making it intelligible to all students of fair mathematical knowledge, which could be accomplished best by considering mathematics constantly in its historical development.

The Philosophy of Mathematics
by Auguste Comte - Harper & brothers
The book presents a map of the wide region of mathematical science -- a bird's-eye view of its features, and of the true bearings and relations of all its parts. Auguste Comte was the first philosopher of science in the modern sense of the term.
(11843 views)

Aesthetics for the Working Mathematician
by Jonathan M. Borwein - DocServer
Most research mathematicians neither think deeply about nor are terribly concerned about either pedagogy or the philosophy of mathematics. Nonetheless, as I hope to indicate, aesthetic notions have always permeated (pure and applied) mathematics.
(11429 views)