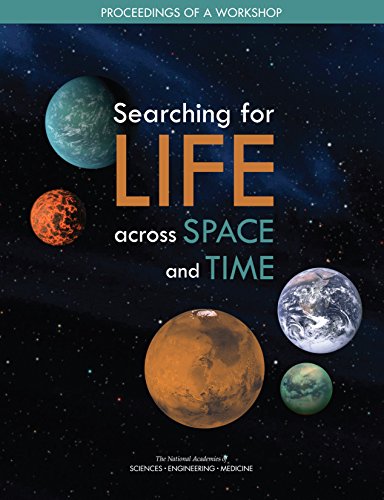 Searching for Life Across Space and Time

Description:
The search for life is one of the most active fields in space science and involves a wide variety of scientific disciplines, including planetary science, astronomy and astrophysics, chemistry, biology, chemistry, and geoscience. In December 2016, the Space Studies Board hosted a workshop to explore the possibility of habitable environments in the solar system and in exoplanets, techniques for detecting life, and the instrumentation used. This publication summarizes the presentations and discussions from the workshop.

From Chaos to Consciousness: A Brief History of the Universe
by Mike Corwin - Bookboon
A textbook intended for a one-semester course in Astronomy. After introductory chapters on the history of astronomy, it is narrowly focused on material directly and chronologically related to the eventual rise of conscious beings in the universe.
(3760 views)

Archaeology, Anthropology, and Interstellar Communication
by Douglas A. Vakoch - NASA
Addressing a field that has been dominated by astronomers, physicists, and computer scientists, the contributors to this collection raise questions about the ease of establishing meaningful communication with an extraterrestrial intelligence.
(3936 views)

Are We Alone?
by Gregg Easterbrook - The Atlantic Monthly
Scanning the universe to see if we have company has fallen out of favor among many scientists, but the true believers who continue to search raise diverting questions -- why planets form where they do, and how life began, and where we might end up.
(7841 views)

The Galactic Habitable Zone I. Galactic Chemical Evolution
by G. Gonzalez, D. Brownlee, P. Ward - arXiv
The GHZ is that region in the Milky Way where an Earth-like planet can retain liquid water on its surface and provide a long-term habitat for animal-like aerobic life. In this paper we examine the dependence of the GHZ on Galactic chemical evolution.
(7976 views)