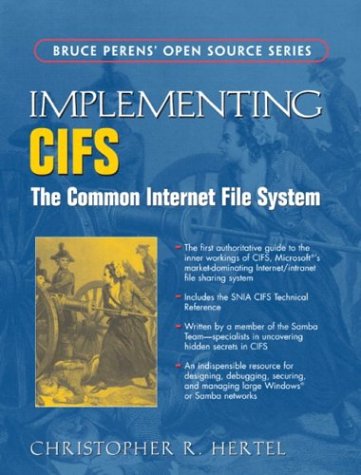 Description:
For years, developers and administrators have struggled to understand CIFS, Microsoft's poorly documented standard for Internet file sharing. This book is a cross-platform guide to CIFS capabilities and behavior. Implementing CIFS not only delivers the knowledge of a Samba Team member dedicated to investigating the inner workings of CIFS, it also identifies and describes crucial specifications and supporting documents. This book is aimed at developers who want to add CIFS compatibility to their products. It will also be very helpful to network and system administrators who need to understand the things that CIFS does on the wire, in the server, and at the desktop. In addition, some of the Internet security community (both the light and the dark sides) is interested in the (mis)behavior of the CIFS suite. This is a technical book, and knowledge of programming and TCP/IP networking is assumed. The protocol descriptions, however, start with the basics and build up, so very little previous knowledge of CIFS is expected.

Baking Pi: Operating Systems Development
by Alex Chadwick - University of Cambridge
This course takes you through the basics of operating systems development in assembly code. Rather than leading the reader through the full details of creating an Operating System, these tutorials focus on achieving a few common tasks separately.
(7739 views)

Xen Virtualization Essentials
by Neil Smyth - Virtuatopia
Xen is a feature rich, open source, hypervisor-based virtualization solution which has gained both wide acceptance and an enviable reputation throughout the IT industry. This book emphasizes the practical aspects of working with Xen.
(9916 views)

MMURTL V1.0
by Richard A. Burgess - Sensory Publishing
Originally titled Developing Your Own 32 Bit Operating System this book shows you how one man built a complete, 32 bit operating system for the Intel processors from scratch, running on processors from the 80386, all the way up to the Pentium III.
(9198 views)

Operating Systems and Middleware: Supporting Controlled Interaction
by Max Hailperin - Gustavus Adolphus College
Intended for juniors, seniors, and first-year graduate students, this book takes a modern approach to the Operating Systems course. By using this text, students will obtain an understanding of how contemporary operating systems and middleware work.
(12842 views)