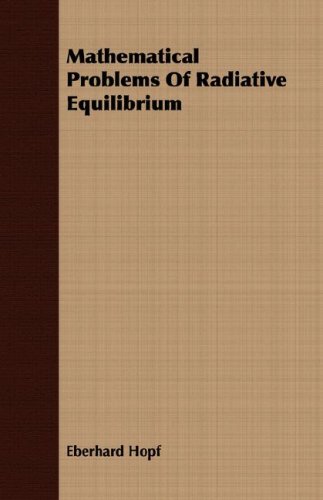 Description:
Schwarzschild's classical work on absorption and diffusion in the sun's atmosphere, and the continuation of these investigations through A. Eddington, J.H. Jeans, R.A. Milne and others, have rendered the theory of radiative equilibrium a definite chapter of mathematical astrophysics. Besides the known results (theory of Milne's standard model, infinitely deep slab with no radiation incident on its surface) the reader will also find more or less detailed discussions of other models.

Lectures on Black Holes, Topological Strings and Quantum Attractors
by Boris Pioline - arXiv
In these lecture notes, the author reviews some recent developments on the relation between the macroscopic entropy of four-dimensional BPS black holes and the microscopic counting of states, beyond the thermodynamical, large charge limit.
(10469 views)

Introduction to Cosmology
by David H Lyth - arXiv
These notes form an introduction to cosmology with special emphasis on large scale structure, the cmb anisotropy and inflation. In some places a basic familiarity with particle physics is assumed, but otherwise no special knowledge is needed.
(13027 views)