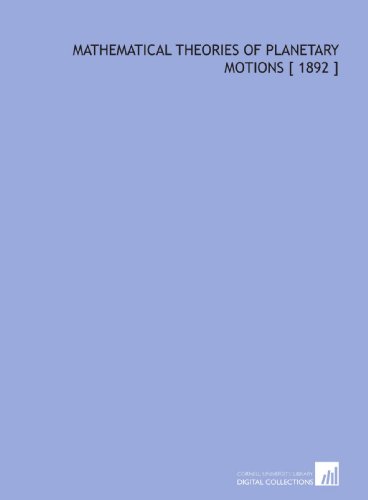 Description:
This work is intended not merely as an introduction to the special study of astronomy, but rather for the student of mathematics who desires an insight into the creations of his masters in this field. The author has endeavored to meet this need and at the same time to produce a book which shall be so near the present state of the science as to include recent investigations and to indicate unsettled questions.

Celestial Mechanics: Notes and Work
by J.D. Mireles James - Rutgers University
These are notes about some elementary topics in celestial mechanics. They focus primarily on numerical methods for studying n-body problems, but they include enough background material so that they are readable outside the context of that course.
(12490 views)

Planetary Theory
by Ernest Brown, Clarence Shook - Cambridge University Press
The purpose of this volume is the development of methods for the calculation of the general orbit of a planet. We attempted to anticipate the difficulties which arise, by setting forth the various devices which may be utilized when needed.
(11517 views)

The Foundations of Celestial Mechanics
by George W. Collins, II - Pachart Pub House
The notions of Hamiltonians and Lagrangians are as vital today as they were a century ago and anyone who aspires to a career in astronomy should be exposed to them. There are also items unique to astronomy to which an aspirant should be exposed.
(11328 views)

An introductory treatise on the lunar theory
by Ernest W Brown - Cambridge University Press
Problem of three bodies, forces on the Moon relative to the Earth, and those on the Sun relative to the centre of mass of the Earth and Moon, force-function and disturbing function usually used, distinction between the lunar and the planetary theories.
(11841 views)