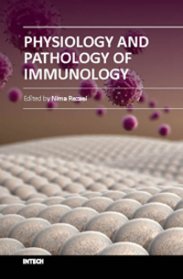 Physiology and Pathology of Immunology
by Nima Rezaei (ed.)

Description:
The current book covers a spectrum of high-impact knowledge on the complex interplay between the environment, genes, and immunity that culminates in a generation of notorious processes of immune-related disorders. From evolution of regulatory T-cell function, gigantic cytokine networks within the human body to host-pathogen interactions of Chagas disease and Parkinson's disease, the Physiology and Pathology of Immunology goes further to decipher new codes from the immunity enigma.

Microbiology and Immunology Online
by Richard Hunt et al. - University of South Carolina
This internet textbook covers all aspects of microbiology and immunology and is based a course for second year Medical Students in the Medical Microbiology course. At present, there are approximately 70 chapters in the book.
(16444 views)

Antimicrobial Resistance: Issues and Options
by P.F. Harrison (ed.) - National Academies Press
Antibiotic resistance is neither a surprising nor a new phenomenon. It is an increasingly worrisome situation, however, because resistance is growing and accelerating while the world's tools for combating it decrease in power and number.
(7090 views)