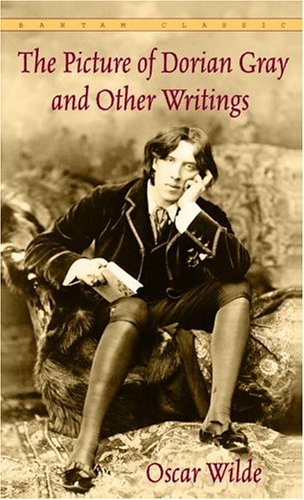 The Picture of Dorian Gray
by Oscar Wilde

Description:
Oscar Wilde's story of a fashionable young man who sells his soul for eternal youth and beauty is one of his most popular works. Written in Wilde's characteristically dazzling manner, full of stinging epigrams and shrewd observations, the tale of Dorian Gray's moral disintegration caused something of a scandal when it first appeared in 1890. Wilde was attacked for his decadence and corrupting influence, and a few years later the book and the aesthetic/moral dilemma it presented became issues in the trials occasioned by Wilde's homosexual liaisons, trials that resulted in his imprisonment. Of the book's value as autobiography, Wilde noted in a letter, "Basil Hallward is what I think I am: Lord Henry what the world thinks me: Dorian what I would like to be--in other ages, perhaps."

Selected Poems of Oscar Wilde
by Oscar Wilde - Methuen
Wilde, more famous as a playwright or prisoner than as a poet, invites readers to meet an unknown and intimate figure. The poetry of his formative years includes the elegy to his young sister and the grieving lyric at the death of his father.
(13497 views)

Salome: A Tragedy in one act
by Oscar Wilde - John Lane Co.
The play tells in one act the Biblical story of Salome, stepdaughter of Herod Antipas, who, to her stepfather's dismay, requests the head of John the Baptist on a silver platter as a reward for dancing the dance of the seven veils.
(5102 views)

A Woman of No Importance
by Oscar Wilde - Methuen & Co.
The play premiered in 1893 at London's Haymarket Theatre. It is a testimony of Wilde's wit and his brand of dark comedy. It looks in particular at English upper class society and has been reproduced on stages in Europe and America since his death.
(5230 views)