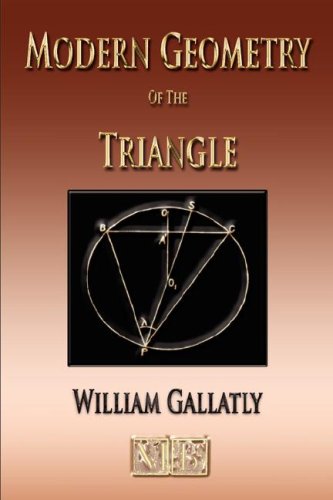 The Modern Geometry of the Triangle
by William Gallatly

Description:
In this little treatise on the Geometry of the Triangle are presented some of the more important researches on the subject which have been undertaken during the last thirty years. The author ventures to express not merely his hope, but his confident expectation, that these novel and interesting theorems some British, but the greater part derived from French and German sources will widen the outlook of our mathematical instructors and lend new vigour to their teaching.

The Foundations of Geometry
by David Hilbert - Project Gutenberg
Axioms were uncovered in Euclid's geometry. These discoveries were organized into a more rigorous axiomatic system by David Hilbert in his Grundlagen der Geometrie (1899) which contained his definitive set of axioms for Euclidean geometry.
(13479 views)

Euclid's Elements
by D.E.Joyce
Online edition of Euclid's Elements, one of the most beautiful and influential works of science in the history of humankind. The text of all 13 Books is complete, and all of the figures are illustrated using a Java applet called the Geometry Applet.
(12998 views)

First Principles of Symmetrical Beauty
by David Ramsay Hay - W. Blackwood and sons
From the table of contents: Nature of the science of aesthetics explained; Plane figures the bases of all forms; The isosceles triangle; Universal application of the composite ellipse in the arts of ornamental design; and more.
(10918 views)

Coordinate Geometry
by Henry B. Fine, Henry D. Thompson - The MacMillan Company
Contents: Coordinates; The Straight Line; The Circle; The Parabola; The Ellipse; The Hyperbola; Transformation Of Coordinates; The General Equation Of The Second Degree; Sections Of A Cone; Systems Of Conics; Tangents And Polars Of The Conic; etc.
(13376 views)