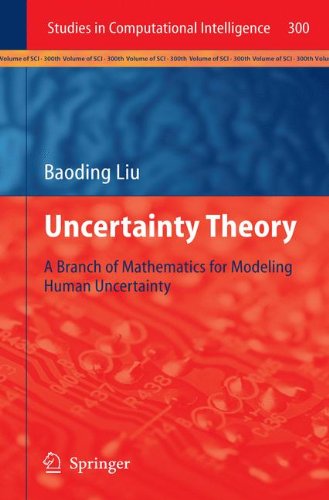 Description:
Uncertainty theory is a branch of mathematics based on normality, monotonicity, self-duality, countable subadditivity, and product measure axioms. Uncertainty is any concept that satisfies the axioms of uncertainty theory. Thus uncertainty is neither randomness nor fuzziness. It is also known from some surveys that a lot of phenomena do behave like uncertainty.

Fractional Calculus: Theory and Applications
by Francesco Mainardi (ed.) - MDPI AG
Fractional calculus is allowing integrals and derivatives of any positive order. It can be considered a branch of mathematical physics that deals with integro-differential equations, where integrals are of convolution type ...
(2953 views)

Mathematics and Biology: The Interface, Challenges, and Opportunities
by Simon A. Levin
This report explores the interface between biology and mathematics. It argues that the stimulation of biological application will enrich the discipline of mathematics for decades or more, as have applications from the physical sciences in the past.
(14143 views)

Derivations of Applied Mathematics
by Thaddeus H. Black - Debian Project
The book deals with applied mathematical proofs. It emphasizes underlying mathematical motivation, without full mathematical rigor. Mathematical results are derived from applied perspective of the engineer and the scientist.
(19708 views)

On 2D Inverse Problems
- Wikibooks
This book is about the inverse problems that take its roots in medical imaging and similar imaging methods from geophysics. The study was motivated by the needs of non-destructive and non-intrusive methods for imaging of hidden objects.
(4709 views)