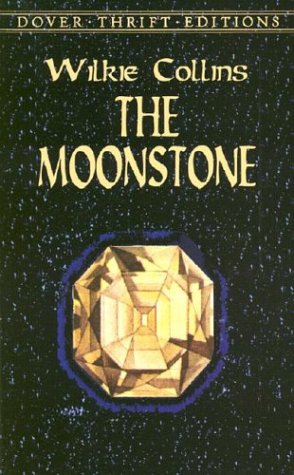 The Moonstone
by Wilkie Collins

Description:
Called "the first and greatest of English detective novels" by T.S.Eliot, The Moonstone is a masterpiece of suspense. A fabulous yellow diamond becomes the dangerous inheritance of Rachel Verinder. Outside her Yorkshire country house watch the Hindu priests who have waited for many years to reclaim their ancient talisman, looted from the holy city of Somnauth. When the Moonstone disappears the case looks simple, but in mid-Victorian England no one is what they seem, and nothing can be taken for granted. Witnesses, suspects, and detectives each narrate the story in turn. The bemused butler, the love-stricken housemaid, the enigmatic detective Sergeant Cuff, the drug-addicted scientist--each speculate on the mystery as Collins weaves their narratives together. The Moonstone transcends the genre of detective novel or murder mystery, though, and this new edition features a fascinating introduction by John Sutherland which discusses the themes of imperialism, sensationalism and mesmerism.

The Evil Genius
by Wilkie Collins - Project Gutenberg
The story of divorce and remarriage, unfaithfulness, and children battered helplessly on the storms of their parents' passions. Collins' boldness in drawing sympathetic portraits of both the wife and 'the other woman' is astonishingly modern.
(6399 views)

Blind Love
by Wilkie Collins - Chatto & Windus
The novel is set during the Irish Land War of the early 1880s and tells the story of Iris Henley, a young woman who marries the 'wild' Lord Harry Norland, a member of an Irish secret society, and becomes unhappily drawn into a conspiracy plot...
(2920 views)

The Two Destinies
by Wilkie Collins - Chatto & Windus
Collins explores the themes of 'destined spirits' and supernatural visions. George and Mary are childhood sweethearts in Suffolk's Greenwater Broad. George's separates them by taking his family to America where he subsequently dies...
(3732 views)

Antonina, or, The Fall of Rome
by Wilkie Collins - Feedbooks
Young Antonia had the misfortune to live in interesting times -- the days when mighty Rome was brought low by the terror of the Goths, from the period of the march of the invaders over the Alps to the close of the first barbarian blockade of Rome.
(5843 views)