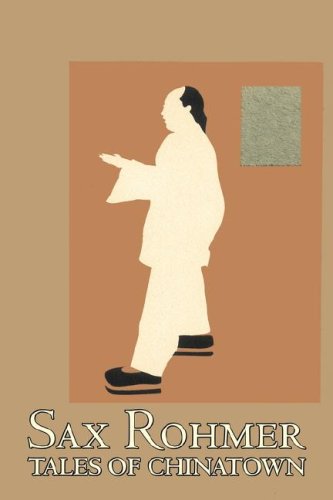 Tales of Chinatown
by Sax Rohmer

Description:
Here is a first-hand description of some of the doings in the slimy, mysterious places of the largest city in England. Here the detectives of Scotland Yard know of many strange things and see the results of the workings of such evil minds as Dr. Fu Manchu.

The Devil Doctor
by Sax Rohmer - Methuen & Co.
You are in for a ride of adventure, mystical artifacts and bizarre murders. There will be eastern drugs and beautiful women, as well as feats of intelligence and honor. This book is definitely worth the read as part of the overall Fu Manchu series.
(986 views)

The Insidious Dr. Fu Manchu
by Sax Rohmer - A. L. Burt
Follow the exciting adventures of Commissioner Nayland Smith as he pursues Dr. Fu Manchu across the opium dens of Thames-side London and various country estates. Rohmer's novel is a combination of Sherlock Holmes pastiche and anti-Chinese paranoia.
(3928 views)

Bat Wing
by Sax Rohmer - McKinlay, Stone & Mackenzie
Paul Harvey chats in his office with pal Knox. Colonel Juan Menendez shows them a bat wing someone left for him, and claims someone, seen only as a shadow, watches him. Harvey is plunged into a world of voodoo, vampires and murder.
(1169 views)

Brood of the Witch-Queen
by Sax Rohmer - C. Arthur Pearson, Ltd
This is a 1918 supernatural novel by Sax Rohmer. The story deals with Robert Cairn and his suspicions of Antony Ferrara, the adopted son of an old friend and colleague of Robert's father, Dr Bruce Cairn, of infernal magic and supernatural influence.
(1113 views)