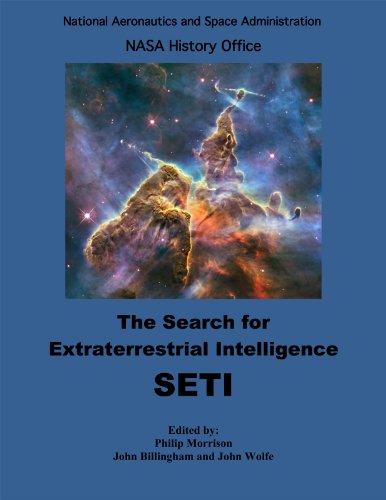 Description:
Since the beginning of civilization, people have wondered if we are alone in the universe or whether there is intelligent life somewhere else. In the late twentieth century, scientists converged upon the basic idea of scanning the sky and 'listening' for non-random patterns of electromagnetic emissions such as radio or television waves in order to detect another possible civilization somewhere else in the universe.

From Chaos to Consciousness: A Brief History of the Universe
by Mike Corwin - Bookboon
A textbook intended for a one-semester course in Astronomy. After introductory chapters on the history of astronomy, it is narrowly focused on material directly and chronologically related to the eventual rise of conscious beings in the universe.
(6104 views)

When Biospheres Collide: A History of NASA's Planetary Protection Programs
by Michael Meltzer - NASA
This book presents the history of planetary protection by tracing the responses to the microbiological contamination concerns on NASA's missions to the Moon, Mars, Venus, Jupiter, Saturn, and many smaller bodies of our solar system.
(9354 views)

Man's Place in the Universe
by Alfred R. Wallace - Chapman and Hall
Contents: early ideas; modern ideas; the new astronomy; the distribution of the stars; distances of stars - the sun's motion; unity and the evolution of the star-system; are the stars infinite?; our relation to the Milky Way; and more.
(8990 views)

The Beginning and the End: The Meaning of Life in a Cosmological Perspective
by Clement Vidal - arXiv
Where does it all come from? Where are we going? Are we alone in the universe? What is good and what is evil? The scientific narrative of cosmic evolution demands that we tackle such big questions with a cosmological perspective.
(9013 views)