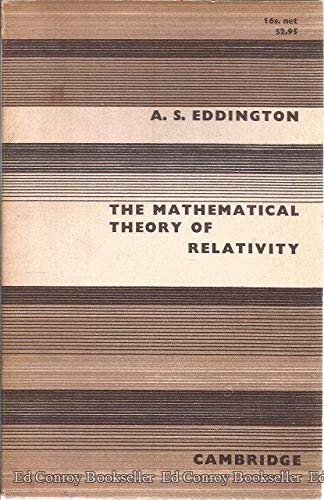 The Mathematical Theory of Relativity
by Arthur Stanley Eddington

Description:
Sir Arthur Eddington here formulates mathematically his conception of the world of physics derived from the theory of relativity. The argument is developed in a form which throws light on the origin and significance of the great laws of physics; its consequences are followed to the full extent in the consideration of gravitation, relativity, mechanics, space-time, electromagnetic phenomena and world geometry.

Space - Time - Matter
by Hermann Weyl - Methuen & Co.
A classic of physics -- the first systematic presentation of Einstein's theory of relativity. Long one of the standard texts in the field, this excellent introduction probes deeply into Einstein's general relativity, gravitational waves and energy.
(7711 views)

General Covariance and the Foundations of General Relativity
by John D Norton - University of Pittsburgh
This text reviews the development of Einstein's thought on general covariance (the fundamental physical principle of GTR), its relation to the foundations of general relativity and the evolution of the continuing debate over his viewpoint.
(8403 views)