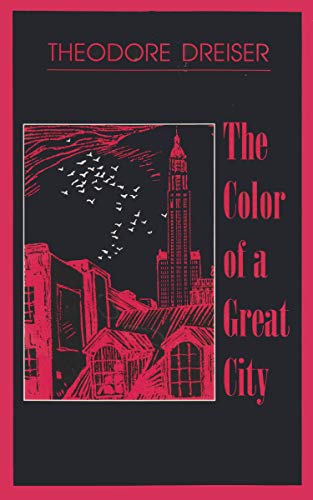 The Color of a Great City
by Theodore Dreiser

Description:
In stories such as Six O'Clock, The City Awakes and The Waterfront, the author returns the reader to turn-of-the-century New York with his early memories of the city. Also, and more particularly, they represent in part, at least, certain phases which at that time most arrested and appealed to the author, and which now are fast vanishing or are no more.

Jennie Gerhardt
by Theodore Dreiser - Harper & Brothers
Novel by Theodore Dreiser, it exemplifies the naturalism of which Dreiser was a proponent, telling the unhappy story of a working-class woman who accepts all the adversity life visits on her and becomes the mistress of two wealthy and powerful men.
(10736 views)

The Financier
by Theodore Dreiser - Harper
Based on the life of flamboyant financier C.T. Yerkes, Dreiser's portrayal of the unscrupulous magnate Cowperwood embodies the idea that behind every great fortune there is a crime. Dreiser's great intensity gives this portrait a powerful reality.
(9327 views)

An American Tragedy
by Theodore Dreiser - Feedbooks
A bestseller, this novel is the culmination of Dreiser's powerful fictional art. Starting from a murder case, the author immersed himself in the social background of the crime to write a book that is both a reportage and a study of character.
(16717 views)