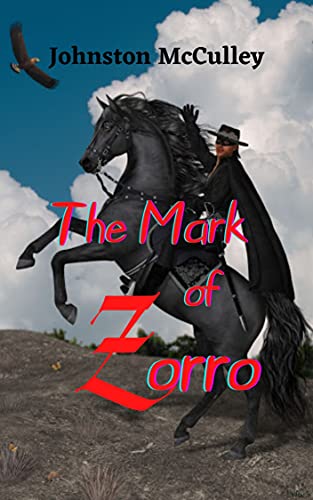 The Mark of Zorro
by Johnston McCulley

Description:
Novel made by the American writer Johnston McCulley in 1919. It narrates the adventures and misadventures of a young man of the Californian aristocracy called Don Diego De la Vega, a young nobleman, son of a Spanish landowner, who lived in the then town of Los Angeles, in old Spanish California of the early 1800s. De la Vega finds that the colonial government has become a tyranny that exploits and subdues the inhabitants of these lands.

The Rustler of Wind River
by George W. Ogden - ManyBooks
A tale of the attempts of the unscrupulous cattlemen to drive the homesteader from their holdings and leave the land free for grazing. Alan leads the homesteaders in their defense and, after many misunderstandings clears his love story as well.
(7474 views)

The Rider of Golden Bar
by William Patterson White - ManyBooks
Spirited story, full of action, which should please readers of western fiction. The hero, who is elected sheriff on the supposition that he is lazy and easy-going, proves an unpleasant surprise to the corrupt ring that had supported him.
(7867 views)

The Devil's Justice
by Chad Cull
When Jace Carlin's family is killed by drunken marauders, he goes on a quest for vengeance until he settles the score. With his mission complete, he finds no satisfaction. He is alone and haunted by the violence and killing he has left behind him.
(7396 views)

Arizona Argonauts
by H. Bedford-Jones - Doubleday, Page & Co
Piute Tompkins, sole owner of what used to be the Oasis Saloon but was now the Two Palms House, let the front feet of his chair fall to the porch floor and deftly shot a stream of tobacco juice at an unfortunate lizard basking in the sunny sand ...
(2917 views)