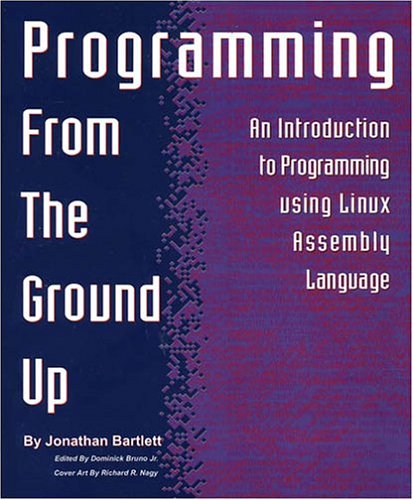 Programming From The Ground Up
by Jonathan Bartlett

Description:
Programming from the Ground Up is an introduction to programming using assembly language on the Linux platform for x86 machines. It is a great book for novices who are just learning to program as well as for intermediates who have never learned or mastered assembly language programming. It covers many topics skipped by other similar books, including memory management, debugging, interfacing with C, dynamic libraries, and even a bit on GUI programming.

MIPS Assembly Language Programming Using QtSpim
by Ed Jorgensen - University of Nevada, Las Vegas
The purpose of this text is to provide a simple and free reference for university level programming and architecture units that include a brief section covering MIPS assembly language. The text uses the QtSpim simulator.
(13755 views)

Programmed Introduction to MIPS Assembly Language
by Bradley Kjell - Central Connecticut State University
This is a course in assembly language programming of the MIPS processor. It emphasizes the topics needed for study of computer architecture: bits, bit patterns, operations on bit patterns, and how bit patterns represent instructions and data.
(12332 views)

The Second Book of Machine Language
by Richard Mansfield - Compute! Publications
This book offers the reader both a detailed description of the LADS assembler and an efficient tool, a complete language with which to write other machine language programs. Every line in the program is described, all the subroutines are explained.
(18990 views)