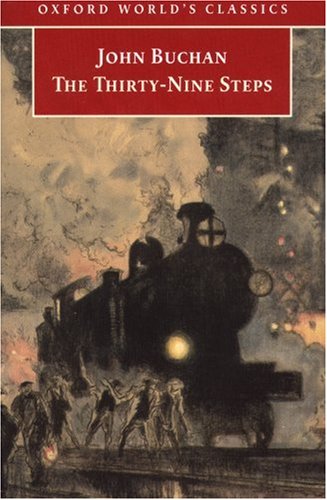 The Thirty-Nine Steps
by John Buchan

Description:
Famous as the basis for several films, including the brilliant 1935 version directed by Alfred Hitchcock, The Thirty-Nine Steps is a classic of early twentieth-century popular literature. Richard Hannay has just returned to England after years in South Africa and is thoroughly bored with his life in London. But then a murder is committed in his flat, just days after a chance encounter with an American who had told him about an assassination plot that could have dire international consequences. An obvious suspect for the police and an easy target for the killers, Hannay goes on the run in his native Scotland where he will need all his courage and ingenuity to stay one step ahead of his pursuers.

Salute to Adventurers
by John Buchan - ManyBooks
A novel set during the beginning of the Jamestown Colony, a saga about one man's struggle to survive and even find love in a land beset by trade controls with England enforced by pirates, religious strife, harsh environmental conditions, and more.
(4514 views)

The Power-House
by John Buchan - Houghton Mifflin
When his friend vanishes, Sir Edward Leithen is at first only mildly concerned. But a series of strange events that follow the disappearance convince Leithen that he is dealing with a sinister secret society. Their codename is 'The Power-House'.
(6274 views)

Sick Heart River
by John Buchan - Hodder & Stoughton
Edward Leithen is given a year to live. Fearing he will die unfulfilled, he devotes his last months to seeking out and restoring to health Galliard, a young Canadian banker. Galliard is in remotest Canada searching for the River of the Sick Heart.
(4573 views)