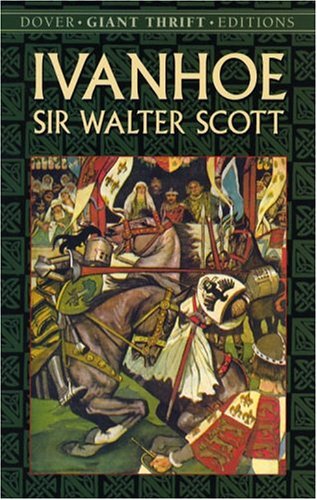 Description:
The epitome of the chivalric novel, Ivanhoe sweeps readers into Medieval England and the lives of a memorable cast of characters. Ivanhoe, a trusted ally of Richard-the-Lion-Hearted, returns from the Crusades to reclaim the inheritance his father denied him. Rebecca, a vibrant, beautiful Jewish woman is defended by Ivanhoe against a charge of witchcraft -- but it is Lady Rowena who is Ivanhoe's true love. The wicked Prince John plots to usurp England's throne, but two of the most popular heroes in all of English literature, Richard-the-Lion-Hearted and the well-loved famous outlaw, Robin Hood, team up to defeat the Normans and reagain the castle. The success of this novel lies with Scott's skillful blend of historic reality, chivalric romance, and high adventure.

Peveril of the Peak
by Walter Scott - George Routledge
Ranging from Derbyshire to the Isle of Man and culminating in London, this novel interweaves political intrigue, personal responsibilities and the ways in which the forces of history are played out in the struggles of individual human lives.
(7253 views)

Guy Mannering
by Sir Walter Scott - Estes & Lauriat
Narrating the story of Harry and his adventures, this amazing work dwells on the ups and downs he faced throughout his life. As Mannering, the student of astrology, foresees this child's future, everything appears to be in turmoil and mayhem.
(7778 views)

Kenilworth
by Sir Walter Scott
Amy is married to the Earl of Leicester, one of the queen's favorites, who must keep his marriage secret or else incur royal displeasure. Rich in character, melodrama, and romance, Kenilworth is rivaled only by the great Elizabethan dramas.
(8032 views)

Saint Ronan's Well
by Walter Scott - J.M. Dent
Set in Scotland, at the beginning of the 19th century, Scott's story turns its back upon the wars waging on the world's stage and presents a regency comedy. Meg Dodd, a sentimental virago, keeps a run-down inn in a derelict Tweedale village ...
(5531 views)