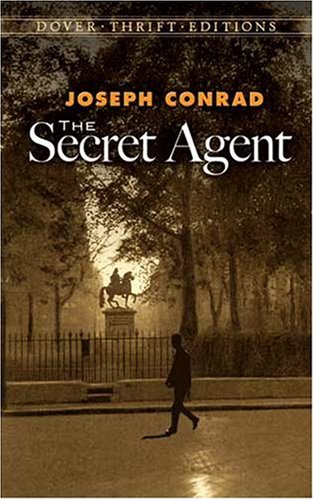 The Secret Agent
by Joseph Conrad

Description:
A group of revolutionaries in the backstreets of 19th-century London plot the destruction of the Greenwich Observatory in this 1907 masterpiece of suspense. Rich in atmosphere and psychological realism, the tale centers on a shopkeeper whose double life encompasses a quiet family circle, active friendships with anarchists, and allegiance to a foreign government.

Victory: An Island Tale
by Joseph Conrad - Methuen & co
Axel Heyst is involved in the operation of a coal company on a remote island. When that fails, he turns his back on humanity until, once again, he is drawn into contact with the world by a girl whom he rescues and bears off to his island retreat.
(8421 views)

The Shadow Line: A Confession
by Joseph Conrad - Doubleday, Page & Co
A novel by Joseph Conrad, one of his later works, being published in 1917. The story depicts the development of a young man upon taking a boat captaincy in the Orient, with the shadow-line of the title representing the threshold of this development.
(7388 views)

Lord Jim: a romance
by Joseph Conrad - Doubleday
A story of a young, idealistic Englishman who is disgraced by a single act of cowardice while serving as an officer on a merchant-ship sailing from an eastern port. His life is ruined: an isolated scandal has assumed horrifying proportions.
(7707 views)