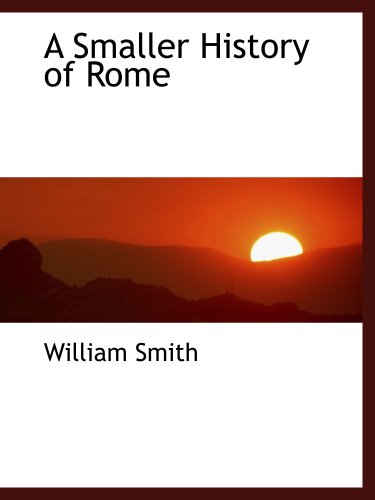 A Smaller History of Rome
by William Smith, Eugene Lawrence

Description:
This is a short history of Rome, from the earliest times to the establishment of the empire, by William Smith, with a continuation to A.D. 479. by Eugene Lawrence. From the contents: geography of Italy and early inhabitants, the kings of Rome, the establishment of the republic, decemvirate, the capture of Rome by the Gauls, the final union of the two orders, Punic wars, ... , to Romulus Augustulus A.D. 476.

A Lightning Spark for Pompeian Visitors
by Vittorio Macchioro - Mary E. Raiola
The author gives to those who visit Pompei some ideas that may be for them a kind of lightning spark, so that they may penetrate into the very heart of the Roman civilization, and look at it and consider it like a live matter.
(6825 views)

The Holy Roman Empire
by James Bryce - The Macmillan Company
The object of this treatise is not so much to give a narrative history of the countries included in the Romano-Germanic Empire, as to describe the Holy Empire itself as an institution or system, the wonderful offspring of a body of traditions...
(5541 views)

Old Rome
by Robert Burn - George Bell & Sons
This is a handbook to the ruins and monuments of ancient Rome and the Campagna. It is divided into topographical sections for the convenience of travelers visiting Rome, and the monuments which exist in each section have been briefly described.
(4918 views)