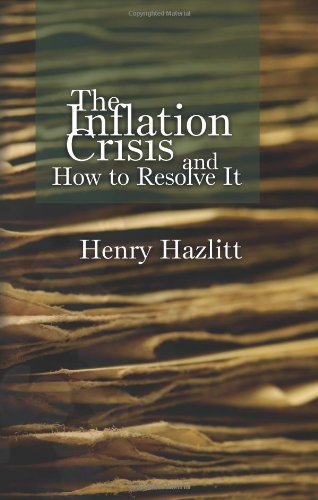 The Inflation Crisis, and How to Resolve It
by Henry Hazlitt

Description:
In this book the author attempted to analyze thoroughly and in depth nearly a score of major problems raised by inflation and chronic fallacies that are in large part responsible for its continuance. Henry Hazlitt is the author of numerous books in economics.

What Has Government Done to Our Money?
by Murray N. Rothbard - Ludwig von Mises Institute
Rothbard's famous monetary essay has influenced two generations of economists and business professionals. After presenting the basics of money and banking theory, the author traces the decline of the dollar from the 18th century to the present.
(14147 views)

Money Market: An Introduction
by AP Faure - Bookboon
Money market has traditionally been defined as the market for short-term marketable debt instruments, such as commercial paper and treasury bills. It is more than this. It embraces all short-term lending and borrowing, marketable and non-marketable.
(4741 views)

Money, Bank Credit, and Economic Cycles
by Jesús Huerta de Soto - Ludwig von Mises Institute
Author has made history with this exciting treatise that the market can fully manage the money and banking sector, without inflation, without business cycles, and without the economic instability that has characterized the age of government control.
(14139 views)