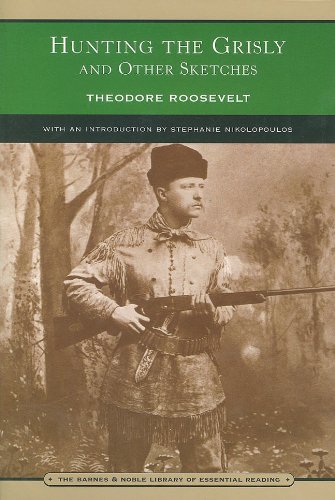 Hunting the Grisly and Other Sketches
by Theodore Roosevelt

Description:
This book brilliantly captures the thrill of the chase as Theodore Roosevelt recounts his North-American hunting adventures. Told in campfire-story spirit, it is a celebration of the great outdoors, a handbook on hunting, and a socio-historical record of the United States in the nineteenth century. Roosevelt relates the daring exploits of going up against North America's most cunning creatures, describing men disastrously getting caught in the traps they set, wolves overcoming one dog only to succumb to the pack, and horses escaping the wrath of the great grizzly.

Red Palmer: A Practical Treatise on Fly Fishing
by James Tayler - Empire Printing and Publishing Co.
Having read papers on Fly-fishing before the Gresham and Islington Angling Societies, and contributed occasional articles to the fishing periodicals, I have been persuaded by the members of those societies to publish my ideas on the subject...
(5448 views)

Tales of Fishes
by Zane Grey - Harper & Brothers
Tales of Fishes is a wonderful collection of stories that range over the most sought after species of salt water fishing-tarpon, bonefish, sailfish, marlin, swordfish, and tuna. It's a perfect sampler to whet the appetite of every armchair angler.
(7656 views)

Some Fish and Some Fishing
by Frank Gray Griswold - John Lane Co.
A fascinating book on ocean and river fishing, also includes sea fishing with kites and sleds. The author fished for the tarpon in Florida waters, all along the Gulf of Mexico as far as Aransas Pass, and in the Panuco River at Tampico, Mexico.
(5835 views)