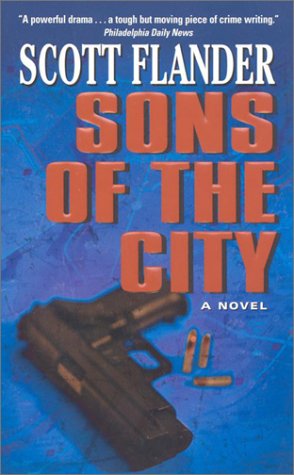 Sons of the City: A Novel
by Scott Flander

Description:
The streets of Philadelphia are meaner than most ... A city on the edge is about to explode. The killing of a cop in a rundown Philly crack house has stoked racial tensions to the boiling point -- as angry police strike out in force, rounding up every young black man in sight. Sergeant Eddie North suspects that the Mob was behind the slaying, though it may already be too late to douse the inevitable fire. A man obsessed with justice -- and vengeance -- North is ready to launch his own private war on Organized Crime, with unexpected help from Michelle Ryder, the policewoman sister of the slain officer, who's willing to risk her own life and career undercover. But the poison polluting the City of Brotherly Love is more toxic than either of them suspects. The Mafia life is dragging Michelle in deeper than she can handle. And Eddie North is about to discover the devastating consequences awaiting those who press the limits of the law.

The Riddle of the Sands
by Erskine Childers
A seminal work of spy fiction first published in 1903, when it caused a sensation in Britain. It is a vivid account of German preparations to invade England, released at a time when tensions between the countries were rising.
(8618 views)

The Gray Mask
by Wadsworth Camp - Doubleday, Page & Company
Before Batman, The Green Hornet, or The Shadow, there was the Gray Mask! A thriller by Charles Wadsworth Camp, a reclusive American writer who served as a war correspondent during World War I, author of The Abandoned Room and Sinister Island.
(7149 views)

Soul Identity
by Dennis Batchelder - Smashwords
What if you could bank your money for your next life? Computer security expert Scott Waverly is skeptical of his new client's claim that they've been tracking souls for almost twenty hundred years. Is it a freaky cult, or a sophisticated con job?
(7168 views)