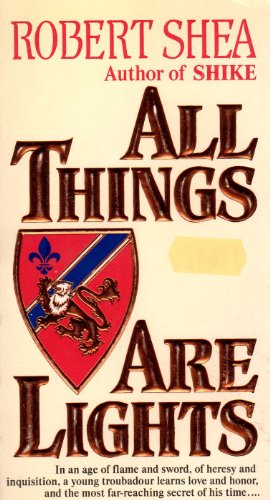 All Things Are Lights
by Robert Shea

Description:
Historical fiction with romance, intrigue, spies, torture, war and the Knights Templar. It takes place during the Inquisition and France's religious crusade into Egypt. The book revolves around a wandering troubadour/knight and the two women he has loved, both unattainable; and the knight he hates and wants to kill, but cannot because he is close to the King.

Zero the Slaver
by Lawrence Fletcher - Project Gutenberg
1,000 Pound Reward. The above-named Sum will be paid to any person giving information which will lead to the discovery of the whereabouts of a young Englishman named Richard Grenville, who was last seen at Durban on 15th December, 1877.
(7424 views)

From Kingdom to Colony
by Mary Devereux - Little, Brown, and Co.
When William, Duke of Normandy, invaded England in 1066, and achieved for himself the title of 'Conqueror', one of those who accompanied him was Robert D'Evreux, younger son of Earl of Rosmar, feudal owner of the town of his name in Normandy...
(5993 views)

The Clash of Steel
by Carl Reutti Mason - The Abbey Press
Like the evening star, slowly mounting its zenith at the evening twilight, rose Napoleon's fortune, for awhile it set, sparkled and flashed, then slowly it began to pale behind the ominous clouds which long had been gathering on the horizon.
(9852 views)

Napoleon and the Queen of Prussia
by L. Muhlbach - Project Gutenberg
Profound silence reigned in the valleys and gorges of Jena and Auerstadt. The battles were over. The victorious French had marched to Jena to repose for a few days, while the defeated Prussians had fled to Weimar, or were wandering across the fields.
(7020 views)