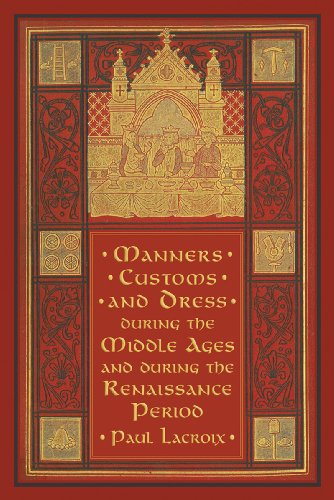 Manners, Customs, and Dress During the Middle Ages, and During the Renaissance Period
by Paul Lacroix

Description:
From the table of contents: Disorganization of the West at the beginning of the Middle Ages; Elements of feudalism; Private life in the castles, the towns, and the rural districts; Food and cookery; Hunting; Games and pastimes; Commerce; Guilds and trade corporations; Taxes, money, and finance; Law and the administration of justice; Secret tribunals; Refinements of penal cruelty; Tortures for different purposes; Jews; Gypsies, tramps, beggars, and cours des miracles; Ceremonials; Costumes.

A History of Spain
by Charles E. Chapman - The Macmillan Company
The present work is an attempt to give in one volume the main features of Spanish history from the standpoint of America. It should serve almost equally well for residents of both the English-speaking and the Spanish American countries.
(5783 views)

Henry IV, Makers of History
by John S. C. Abbott - Project Gutenberg
There is no portion of history fraught with more valuable instruction than the period of those terrible religious wars which desolated the sixteenth century. There is no romance so wild as the veritable history of those times.
(7367 views)

Age of Enlightenment
- Hourly History
From its beginnings as a loosely definable group of philosophical ideas to the culmination of its revolutionary effect on public life in Europe, the Age of Enlightenment is the defining intellectual and cultural movement of the modern world.
(890 views)

Wall Street and the Rise of Hitler
by Antony C. Sutton - G S G & Associates
This book describes the role of the Wall Street financial elite in the 1933 seizure of power by Adolf Hitler in Germany. Contemporary academic histories, with perhaps the sole exception of Carroll Quigley's Tragedy And Hope, ignore this evidence.
(11649 views)