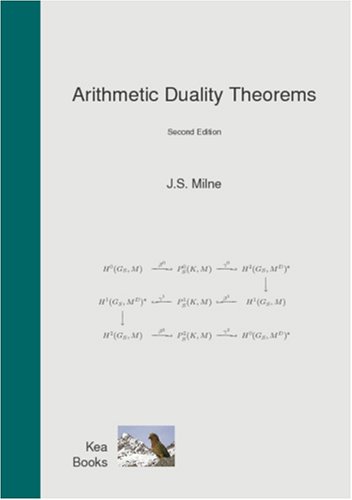 Description:
The book deals with duality theorems in Galois, étale and flat cohomology, for local and global fields, as well as the corresponding rings of integers. Also covered are results about cohomological dimension, finiteness and Euler-Poincaré characteristics. It can serve as a good general reference for these questions.

Lectures On Irregularities Of Distribution
by Wolfgang M. Schmidt - Tata Institute of Fundamental Research
The theory of Irregularities of Distribution began as a branch of Uniform Distributions, but is of independent interest. In these lectures the author restricted himself to distribution problems with a geometric interpretation.
(6233 views)

Geometry of Numbers with Applications to Number Theory
by Pete L. Clark - University of Georgia
The goal is to find and explore open questions in both geometry of numbers -- e.g. Lattice Point Enumerators, the Ehrhart-Polynomial, Minkowski's Convex Body Theorems, Minkowski-Hlawka Theorem, ... -- and its applications to number theory.
(6604 views)

Introduction to Shimura Varieties
by J.S. Milne
This is an introduction to the theory of Shimura varieties, or, in other words, to the arithmetic theory of automorphic functions and holomorphic automorphic forms. Because of their brevity, many proofs have been omitted or only sketched.
(6093 views)

Notes on Fermionic Fock Space for Number Theorists
by Greg W. Anderson - The University of Arizona
This is a compilation of exercises, worked examples and key references that the author compiled in order to help readers learn their way around fermionic Fock space. The text is suitable for use by graduate students with an interest in number theory.
(8619 views)