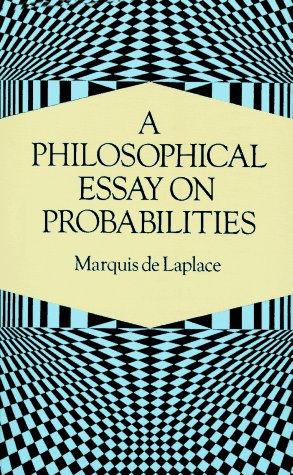 A Philosophical Essay on Probabilities
by Pierre Simon Laplace

Description:
This classic introduces the concepts and uses of probability theory. It demonstrates, without the use of higher mathematics, the application of probability to games of chance, physics, reliability of witnesses, astronomy, insurance, democratic government, and many other areas. It also shows how scientists can express complex ideas in simple terms.

Probability for Finance
by Patrick Roger - BookBoon
The book is intended to be a technical support for students in finance. Topics: Probability spaces and random variables; Moments of a random variable; Usual probability distributions in financial models; Conditional expectations and Limit theorems.
(12403 views)

Probability and Theory of Errors
by Robert Simpson Woodward - J. Wiley & Sons
The theory of probability and the theory of errors now constitute a formidable body of knowledge of great mathematical interest and of great practical importance. Their range of applicability extends to all of the sciences ...
(3781 views)

Probability Theory: The Logic of Science
by E. T. Jaynes - Cambridge University Press
The book is addressed to readers familiar with applied mathematics at the advanced undergraduate level. The text is concerned with probability theory and all of its mathematics, but now viewed in a wider context than that of the standard textbooks.
(13970 views)