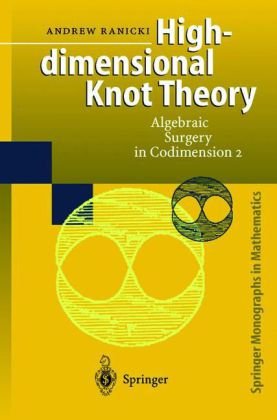 Lower K- and L-theory
by Andrew Ranicki - Cambridge University Press
This is the first treatment of the applications of the lower K- and L-groups to the topology of manifolds such as Euclidean spaces, via Whitehead torsion and the Wall finiteness and surgery obstructions. Only elementary constructions are used.
(7214 views)

Surgical Methods in Rigidity
by F.T. Farrell - Springer
This book is an introduction to the topological rigidity theorem for compact non-positively curved Riemannian manifolds. It contains a quick informal account of the background material from surgery theory and controlled topology prerequesite.
(4997 views)

CDBooK: Introduction to Vassiliev Knot invariants
by S.Chmutov, S.Duzhin, J.Mostovoy - Ohio State Universit
An introduction to the theory of finite type (Vassiliev) knot invariants, with a stress on its combinatorial aspects. Written for readers with no background in this area, and we care more about the basic notions than about more advanced material.
(8342 views)