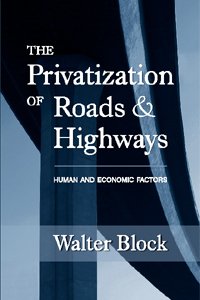 Privatization of Roads and Highways
by Walter Block

Description:
Walter Block's remarkable new treatise on private roads, will cause you to rethink the whole of the way modern transportation networks operate. It is bold, innovative, radical, compelling, and shows how free-market economic theory is the clarifying lens through which to see the failures of the state & see the alternative that is consistent with human liberty.

Aftershocks: Economic Crisis and Institutional Choice
by A. Hemerijck, B. Knapen, E. van Doorne (eds.) - Amsterdam University Press
The book contains essays based on interviews with leading scholars, politicians and representatives from the world of business. They reflect on the origins of the crisis as well as the possible economic and political transformations it may engender.
(5214 views)

The Efficient Use of Energy Resources
by William D. Nordhaus - Yale University Press
The fundamental economic question about energy resources is: How fast should we consume our low-cost resources? Second, there are abundant, but less attractive, resources that may be used when the low-cost resources run thin.
(7135 views)