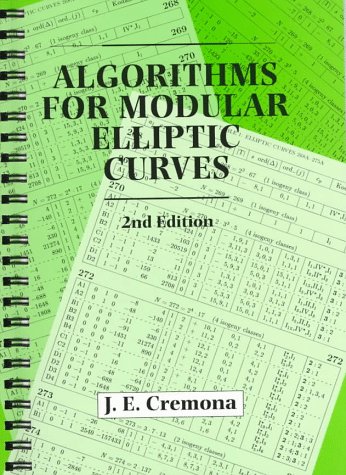 Description:
Elliptic curves are of central importance in computational number theory with numerous applications in such areas as cryptography primality testing and factorization. This book presents a thorough treatment of many algorithms concerning the arithmetic of elliptic curves complete with computer implementation. In the first part the author describes in detail the construction of modular elliptic curves giving an explicit algorithm for their computation. Then a collection of algorithms for the arithmetic of elliptic curves is presented, some of these have not appeared in book form before. Finally an extensive set of tables is provided giving the results of the author's implementations of the algorithms.

Introduction to Shimura Varieties
by J.S. Milne
This is an introduction to the theory of Shimura varieties, or, in other words, to the arithmetic theory of automorphic functions and holomorphic automorphic forms. Because of their brevity, many proofs have been omitted or only sketched.
(7700 views)

Collections of Problems on Smarandache Notions
by Charles Ashbacher - Erhus University Press
This text deals with some advanced consequences of the Smarandache function. The reading of this book is a form of mindjoining, where the author tries to create the opportunity for a shared experience of an adventure.
(15420 views)

Geometry of Numbers with Applications to Number Theory
by Pete L. Clark - University of Georgia
The goal is to find and explore open questions in both geometry of numbers -- e.g. Lattice Point Enumerators, the Ehrhart-Polynomial, Minkowski's Convex Body Theorems, Minkowski-Hlawka Theorem, ... -- and its applications to number theory.
(8291 views)