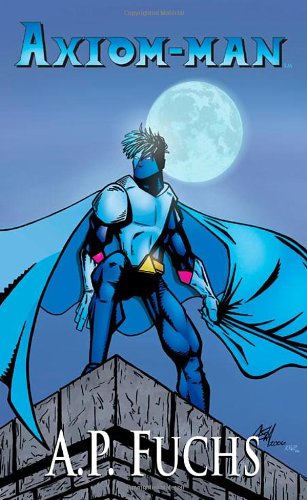 Description:
One night Gabriel Garrison was visited by a nameless messenger who bestowed upon him great power, a power intended for good. Once discovering what this power was and what it enabled him to do, Gabriel became Axiom-man, a symbol of hope in a city that had none.

Eye of the Ocean
by Laurel Hickey - 2morrow press
A sci-fi/fantasy novel trilogy. Thirty-five years ago, the Empress Cassa did 'something' and turned a good chuck of the palace - and herself - to granite. Of course, nobody thinks she's really dead. And nobody thinks she's still quite human either.
(10775 views)

2066
by Peter A. Brandt - Smashwords
Simon Camp was never thrilled about living underground during this ice age but when the old shaman came to town and instructed him to take a journey on the earth's surface to find his daughter, Simon knew his life would change forever.
(6771 views)

This Blue Ball
by Wayne Miller - thisblueball.com
From an unearthly distance, earth seems blue. Life seems predictable because we live backwards. This novel tells of a contact with an extraterrestrial intelligence and illuminates the confluence of a handful of lives though this alien light.
(6753 views)

Grey
by Jon Armstrong - Night Shade Books
Michael is tall, handsome, fashionable, worshipped by billions of fans, and wealthy beyond measure. He is in love with Nora, his beautiful, witty and perfect fiancee. When an assassin's bullets pierce Michael's body, everything changes.
(9524 views)